By writing books having nine publications to my credit, also being a social activist and environmentalist, I keep myself busy in the post-retirement period since January 1998. In addition to it, daily physical and yoga exercises have kept me physically fit like a fiddle, mentally agile, alert, and literary productive. Of course, regular meditation and prayers have given an added impetus to be very active as an octogenarian, full of vigor and enthusiasm. For all the boons, I express my gratitude to eternal God, the ultimate epitome of all
virtues.
My adorable mother Smt. Laxmi Devi was an ardent devotee of our family deity Deot Sidh Baba Balak Nath and daily ritually used to perform puja at home and occasionally visit Baba’s shrine in our locality.
When I joined the Central Government service as an officer in 1964, my mother took me to the shrine of Baba Balak Nath in our locality for his blessings. For over fifty years, I have been very fortunate to have constantly had the kind blessings of Baba Balak Nath. I express my gratitude for His benign benedictions.
In the year 2015, a book in Hindi on Sidh Baba Balaknath co-authored by me and my younger brother Dr. B. L. Sharma was published courtesy of Sidh Baba Balak Nath Mandir Committee, chowk Kishanpura, Jalandhar city. Its copies were distributed to the devotees at an annual Bhandara at the temple.

In September 2020, an urge crossed my mind to write a book in English on Lord Shiva and Deot Sidh Baba Balak Nath. By the grace of Mahadev and Baba Ji the manuscript was ready in record time. My gratitude to omnipresent and omniscient Nirankar. It is my humble effort to offer the book and a serious study of it may provide to the readers solace, bliss, contentment, compassion, and spiritual enlightenment by the benign grace of both the deities. 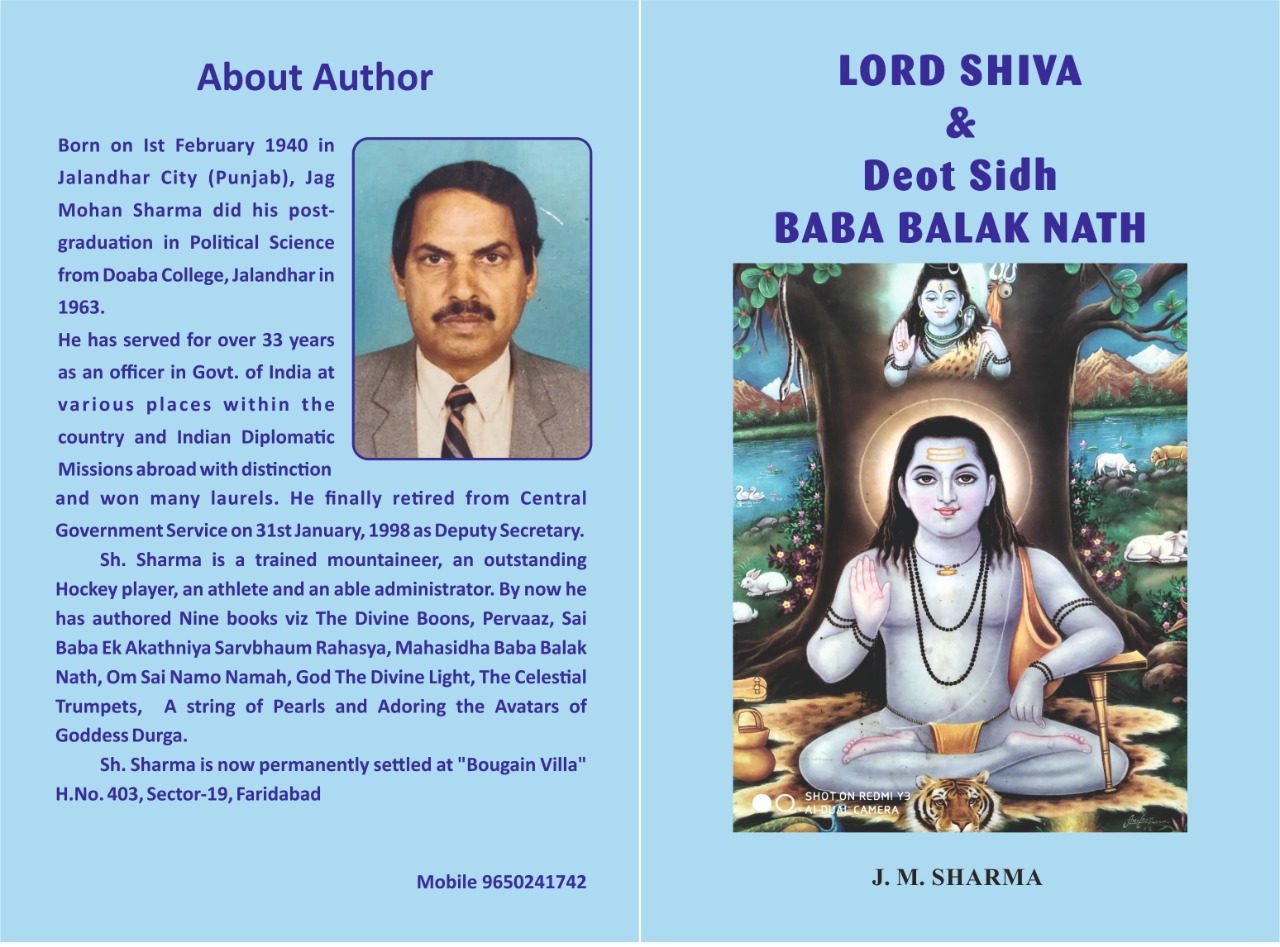 Mr. Jag Mohan Sharma s/O Late Sh Mehar Chand Sharma was born at Jalandhar City on February 1, 1940. After passing Matriculation front L. R. Doaba High School, Jalandhar in 1956, he graduated from Govt College, Dharamshala(Himachal Pradesh). He did Post-graduation in Political Science from Doaba College, Jalandhar in 1963. In 1964, he joined the Central Govt service as an Officer n retired from Govt Service in 1998 as Deputy Secretary. He has had a passion for writing since college days and from 2001 till this year, he has authored nine books.

He has served for over 33 years as an officer in Govt. of India at various places within the country and Indian Diplomatic Missions abroad with distinction and won many laurels. He finally retired from Central Government Service on 31st January 1998 as Deputy Secretary.
Besides writing, Mr. Sharma is an active social worker and an environmentalist. He has also trained in mountaineering, is a former hockey player, an athlete, and an able administrator. He is fond of long morning/evening walks, physical exercises, and yoga. As an octogenarian, he is fit like a fiddle n he attributes all this to God’s benign grace and kindness. By now he has authored Nine books viz The Divine Boons, Pervaaz, Sai Baba Ek Akathniya Sarvbhaum Rahasya, Mahasidha Baba Balak Nath, Om Sai Namo Namah, God The Divine Light, The Celestial Trumpets, A string of Pearls and Adoring the Avatars of Goddess Durga.

As a parting shot, Mr. Sharma said ” One is as old as one thinks to be. Be happy and cheerful. “.
Sh. Sharma is now permanently settled at “Bougain Villa” H.No. 403, Sector-19, Faridabad.

There are no reviews yet.

Access of 1000+ Books. New contents being uploaded on daily basis.

These are like any other digital book with more advanced technology and features. You can access them from any device and from anywhere in the world with the same id and password. This is the most advanced technology of reading books without wasting your system memory and use of paper. The link is downloadable on your desktop, laptop, tab or mobile device.